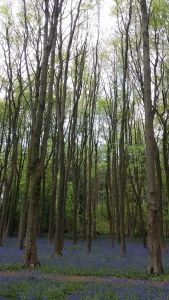 Most of us know that spending time in the woods is a healthy activity, but few would be aware that for many years the Japanese practice of shinrin-yoku – described as “mindful time in the woods” – has been an accepted part of medical treatment in the fight against diseases of both mind and body.

The practice of shinrin-yoku – literally, forest bath – has the power to counter illnesses including cancer, strokes, gastric ulcers, depression, anxiety and stress, says Dr Qing Li, from the Nippon Medical School in Tokyo. According to the doctor, it boosts the immune system, lowers blood pressure and aids sleep.

According to a recent report in the Observer newspaper it could be prescribed by British doctors in the future. A few weeks ago the Woodland Trust suggested forest bathing – which doesn’t, despite its name, involve getting in water – should be among a range of non-medical therapies and activities recommended by GPs’ surgeries to boost patients’ boost wellbeing.

“Social prescribing”, a growing movement in the NHS, can include volunteering, gardening, sports activities, cookery and befriending, explained the report.

“Forest bathing is an opportunity for people to take time out, slow down and connect with nature. We think it could be part of the mix of activities for social prescription,” Stuart Dainton of the Woodland Trust told the Observer. “Evidence about its benefits is building.”

Shinrin-yoku was developed in the 1980s in Japan, explained the Observer report. Although people had been taking walks in the country’s forests for centuries, new studies showed that such activity could reduce blood pressure, lower cortisol levels and improve concentration and memory. A chemical released by trees and plants, called phytoncides, was found to boost the immune system. As more research highlighted the benefits of shinrin-yoku, the Japanese government incorporated it into the country’s health programme.

Dr Li, president of the Society for Forest Medicine in Japan, and the author of “Shinrin-Yoku: The Art and Science of Forest Bathing”, is a world expert and has conducted numerous studies.

“It’s a preventative medicine, not a treatment,” he told the Observer. “People spend their lives increasingly indoors, he said. About 80 per cent of Japan’s population lives in urban areas, and the average American now spends more than 90 per cent of their time indoors. But we are designed to be connected to the natural world, to ‘listen to the wind and taste the air’.”

His book offers this advice for the practice of shinrin-yoku: “Make sure you have left your phone and camera behind. You are going to be walking aimlessly and slowly. You don’t need any devices. Let your body be your guide. Listen to where it wants to take you. Follow your nose. And take your time. It doesn’t matter if you don’t get anywhere. You are not going anywhere. You are savouring the sounds, smells and sights of nature and letting the forest in.”

This advice is important, because even those amongst us who walk regularly, with our dog for example, could well be rushing the walk, our mind lost in thoughts about the day ahead, and oblivious of what is around us. Just getting the walk over and done with as soon as possible and thereby negating the benefits of the time spend immersed in nature.

It is no good taking our body into nature if our mind is elsewhere.

I have touched upon this subject several times over the years while writing these articles on my blog page, because we need reminding. In fact, with our natural environment under such strain, and threat of permanent damage, it is important we realise its importance to our own health, especially as mentioned above so many people spend far too much time indoors.

And most of us want proof before we do anything, and there is proof, for example, one UK study, carried out by King’s College London and published in January 2018, found that exposure to trees, the sky and birdsong in cities improved mental wellbeing. The benefits were still evident several hours after the exposure.

“Even just 20 minutes can help, though 10 hours a month is even better,” said Dainton. “If you live in a city, you may not be able to get to a forest easily, but taking off your shoes in the park and feeling the grass will help you de-stress.”

As Dainton points out, even a few minutes in a natural environment can help us feel better.

A study of 585 Japanese people published last year said that city dwellers were “constantly exposed to stressors” and that “urban living is associated with increased risk of health problems”, including anxiety, depression and psychosis. It concluded: “The psychological benefits of walking through forests are very significant.”

When I read this article I was not surprised to learn how beneficial the natural environment can be but what interested me was how Japan has taken this view into its mainstream healthcare.

I spend most of my free time in nature, usually walking my dog. I do try to be mindful of my environment at the same time, as I did this morning, while walking through a wood I stopped when I realised I could spend a bit of time not going anywhere. I stood and listened for a few minutes. Once the sound of my thoughts had fallen silent, I really heard the wind, the trees and the birdsong… why miss this all because of the need to finish the walk and get on to the next stage in the day?