Yoga has my back 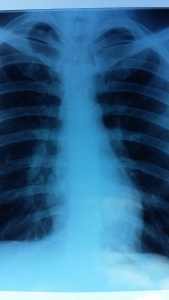 “Here I go again,” I thought as I pulled my back recently, while doing some menial task in the house, and as the surprise of pain changed swiftly to survival mode, I sought to find a comfortable position – a fruitless goal as it turned out! Though lying on my back seemed the least compromised position.

Recovery was now my goal: A disclaimer is to say being a yoga practitioner does not provide exemption from injury or misfortune, but what it does provide is a methodology and approach to recovery. I did not start practising yoga in 1995 because of a back problem, I started because I had heard how good it was for both body and mind, but it has proved to be just what an injured back needs.
Yoga does give us useful tools and means to redress a balance which might have been thrown by misfortune, accidents and things that didn’t go the way we expected. As the chaos theory says, be prepared to be surprised.

I was 29 years old before I was told my back has a scoliosis (a spine which is not straight, a “s” shape in my case, though mild compared to some with the same condition). This diagnosis did explain the back pain I would experience periodically over the years: the scoliosis causes stress points in the back to develop, for example, in the hips and neck.

I was 32 when I started yoga, and began to see how its practice would help strengthen and mobilise my back; and it has been a central focus of my asanas (postures) practice over the years, and in turn, personal experience has helped me understand those I teach who experience back problems. I know, first hand, what steps need to be taken to help a back heal and to keep it working well.
Over the past 24 years I have kept my back healthy most of the time, and I am convinced that if I had not practised yoga my scoliosis would have caused me much more grief. I focus on exercises designed to keep my back strong and as flexible as possible, but there are times when I ask too much of my back!

My recent injury was due to weekend gardening – I was up a 6ft ladder wielding a hedge trimmer as I cut away overgrowth of a lleylandii hedge, brambles and ivy. The hedge was about 14ft high and several feet deep, so leaning forward, swinging a trimmer to and fro, to reach furthest parts of hedge was possibly a mistake and with hindsight, I should have paid someone else to do this work!
It was hard work and nothing felt wrong at the time, but over the following days I had two incidents when my back screamed in pain when I did something simple like picking an item up off the floor! Many of you will know this point in time, in a split second of misjudged movement it all goes wrong!

I should have been mindful! We practice all we can, keeping our attention on what we do, think and say, but it takes a lapsed moment to make it go wrong!

Over doing it is something we all recognise, and physically overdoing it is familiar but there are times when a back pulls after doing something simple, yet we wonder why did this happen, because what we did was not really a physical act?

If we look at our life at the time of an injury we might notice that our back was injured just after, or during, a period of exhaustion and possibly stress. We might blame X for the injury when it might well be Y at the root cause. The two might not appear connected but they can be: for example, a few years a doctor I taught told me about her brother’s back injury. Her brother had called her to say he had hurt his back gardening. She believes our mind can be at the root of our physical problems, so she stopped her brother in his need to blame the gardening and said it was not the gardening, and asked what else was going on in his life? After a few denials of anything else being at fault, he admitted that in his work he had a job appraisal coming up which was causing him a lot of worry and stress.

This is a common pattern, but we are often not aware of how mind and body are so connected. The body can reflect what is going on in the mind: struggling to support and keep going, overloaded, unable to support the burden life has thrown at it, our back which represents what holds us up physically suddenly loses its ability to support both physically and emotionally.
Life is filled with ups and downs, filled with hurdles we fall over instead of leaping over, but we learn to pick ourselves up and carry on.

Over the years yoga has offered me a methodology of how to recover and reclaim the balance in my life, both physically and emotionally, plus a philosophy to explain these patterns of life.
A back injury highlights the need to exercise patience, perseverance and practice (as I wrote about, see blog: https://www.yogabristol.co.uk/2019/05/06/practice-patience-perseverance/). Adapting to what is happening right now is at the heart of practice, so naturally when injured these three principles are adjusted – patience is key to allowing time for an injury to heal and patience with the body struggling to do an exercise which previously came so easily; perseverance is needed to keep doing all we can to heal and our yoga practice essential because movement and exercise using the self-awareness yoga requires is needed when injured.

Taking it slowly and gradually is the key. Also, going inward with practice helps as we focus on the injury and how the body is responding. Taking each stage as it comes. Obvious really but we often ignore what our body is telling us, because we are in a hurry or believe that it should heal quicker!

Decades ago doctors told patients with a back injury to rest and not much else, but they now realise the advice is a mix of rest and movement. It is just a case of getting the stages of recovery correct.

Self-awareness and mindfulness is important – listening to the body and responding appropriately is important. I recall teachers remarking to an injury by saying “good, learn from it!” This does sound harsh, but there is a point. Injuries are sore because its nature’s way of saying pay attention and take care.

We can learn a lot about our body and our self during this period of heightened awareness due to injury and pain. Turn misfortune into something positive. There are times when an injury gives us the opportunity to rest, something we might have really needed prior to the injury: see comment above about injuries happening at times of stress and exhaustion. We rarely stop in time, like a runaway train we live our lives hoping we can handle the next bend!

Although we seek perfection in health and mind it does not always work out that way.

Philosopher and writer Alain de Botton writes in The Consolations of Philosophy: “How problematic to have both a body and a mind, for the former stands in almost monstrous contrast to the latter’s dignity and intelligence. Our bodies smell, ache, sag, pulse, throb and age…Our bodies hold our minds hostage to their whims and rhythms.”

Meditating on change and non-attachment is a useful way of helping us cope with misfortune and things not working out as we intended. Learning not to be attached to the idea of a fixed state of being and not being attached to our body is one approach. There are numerous examples when people become critically sick or injured, facing permanent disability or in some cases a terminal illness, they find a place of being which is accepting and at peace with what has arisen. This takes a huge amount of bravery and strength yet it happens and is achievable. It shows that the spirit or will is stronger that misfortune.

For the fortunate among us not faced with such difficult situations it useful to be aware that we can use this approach on day to day situations. For example, when teaching I use the word “the” before “body” and “mind” instead of “my”. It is a semantic approach which helps to cut the attachment to something like the body and mind. It is a subtle argument but one which reminds me to remain clear in my mind and emotions about the misfortune of injury. I aim to avoid being upset by my body being hurt or sick, or the other way round.

The point is that stuff happens to us, we might seek perfection but this is a goal we are moving towards but never reaching, so we need to be prepared for what might happen on the way. Life is, after all is said and done, a long and winding road with surprises along the way. As the chaos theory states: be prepared to be surprised.