Yoga: What is at the end? 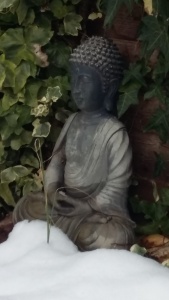 In my last article, posted October 7th, called Yoga: A means to an end, there was a reference to an end. So, it is only right that I now address the question of what is the end, and what happens if we get there, if there is a there?

It is not unusual to focus on goals, and rightly so, because so much in life is about achieving something or getting somewhere, whether it is a physical or mental, it might be passing our exams, an achievement at work, or it might be in sport or endurance challenges like climbing a mountain, or daily life goals like paying the bills and feeding the family.

When it comes to yoga and Buddhism, and most spiritual practices, the ultimate goal is enlightenment; which for many means freedom, clarity, and liberation. Enlightenment’s description depends on the perspective of the individual and what perhaps is most important to them and the way they think.

What is enlightenment and what happens if we reach it?

Generally speaking enlightenment refers to a state of omniscience; when someone is able to understand and know everything.

In Buddhism there is nirvana, whereby enlightenment breaks the cycle of samsara; which is the cycle of life and death. This is rooted in the belief in reincarnation, which both Buddhism and Hinduism believe in, whereby our body might die after a life, but our self (also called the spirit or soul) is reborn into another life, which can be human but also will be an animal; and this goes on infinitely, unless nirvana is attained. I do, however, want to move away from this and focus on the nature of enlightenment in terms of practical daily life.

The Buddha was given many titles and descriptions and one translates as the “awakened one”. This is not reference to his ability to wake up early in the morning, but the ability to be awake and aware moment to moment; his reputed omniscience.

Clarity is the main goal. In the second line of the yoga sutras, yoga is described as the cessation (or controlling) of the fluctuations of the mind; in other words, seeking clarity through achieving stillness and control of our mind. And we know when it is going badly our mind can feel all over the place.

One description which I believe sums it up states: enlightenment is having the clarity to make an appropriate response to every moment.

Knowing what to do next is a skill we would all like to have.

This skill would mean we need not be trapped in our old ways, because we have the capacity to change, to know what to do next. Each and every new moment is an opportunity to do the right thing.
And going back to the reference to reincarnation above; we can see each and every new moment as an opportunity to start again, like a rebirth, and I believe this can be a more relatable view of reincarnation.

This view is possible if we consider that the flow of time means that every new moment is unique. We might feel we have been here before, but each moment is new, so we have the potential to be born again every moment, and being born again means it gives us an opportunity to make changes to the way we live, and therefore each new moment allows a chance to start again.
We need not be stuck nor feel stuck.

Patience, practice and perseverance are words I have used numerous times to describe our practice, because any path, and life, has its ups and downs, mistakes are made and regrets are a part of life. But we keep on moving forward into each new moment in our lives doing our best.

The Buddha may have reached his goal, but this was not after having one attempt at his own enlightenment. He spent six years studying with different teachers, searching for the answers; he practised, he meditated, he over did it too, with severe practices and it is said that he was very close to giving up, when he sat down one night, determined to have his breakthrough, enlightenment or bust. And we know how that night ended!

But was it the end? Not really, because he then spent the next 45 years teaching what he had learnt, called the Dharma, right up to his death at about 80 years old.

What is important here is to understand that it doesn’t matter if the journey feels long, we all start with our first step and continue to take small steps each moment. And along the way we learn many important things. Students of yoga and Buddhism are repeatedly cautioned against a grasping mind which just wants the answer and the goal in their hands, because this approach never succeeds.

Across the planet and the millennia of human civilisations, we humans have sought answers. So at this point I like to add perspective. Author Douglas Adams dealt with this well, in his book Hitchhiker’s Guide to the Galaxy, where the people asked, “what is the meaning of life, the universe and everything else?” Not asking too much? They built a supercomputer to get an answer (note, this was written in the late-1970s); and after a millennia of thinking about it, the computer finally revealed the answer to be 42! Confused? The characters in the book were and then set out to find out the answer to 42 by building an even bigger computer.

Practices such as yoga and Buddhism are filled with paradoxical explanations and answers; and with reason too.

We seek answers when perhaps there are none; or rather, even if we do get an answer what will we do next? Yet, we need to strive and search because a sense of purpose is so important to our well-being. Hence, we would have heard this said numerous times, that the journey is more important than the destination.

The truth (the answer) is more mundane than we might think.

And we must never stop, another expression I like says: “when you get to the top of a mountain keep climbing”, which I first read in Dharma Bums by Jack Kerouac – great book from the Beat Generation author.

Just think of the adventurers, who rarely stop at one challenge, always moving to the next. It is human nature to not stop, and the rules of nature that nothing stops, so why do we focus on such a finality of a goal or enlightenment?

That is why I like the explanation that enlightenment is having the clarity to know how to respond to every new moment: it is all about having clarity and a clear mind. This to me sounds more achievable than a state which seems magical, mystical and beyond this world, after all, we live here.

As mentioned in my last article, this is why it is important to maintain practice, keeping it simple, focusing on here and now, and not some distant and elusive goal, but always feel we are heading somewhere!

Any questions or comments contact me via the blog reply panel below or email gary@yogabristol.co.uk