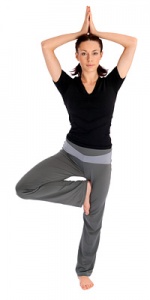 I am guilty of doing writing or saying, yoga and meditation, and I realise that I use these words at times because I know that there is a misunderstanding, but that is pandering to the mistake and not saying as it is: which is, yoga and meditation are one and the same thing.

Eddie Stern writes in Michael O’Neill’s photographic book “On Yoga – The Architecture of Peace”: “To say yoga and meditation as two separate words, as so many of us do, is inaccurate. Meditation and yoga are one and the same. The earliest Upanishads are very clear that yoga means controlling one’s sense organs, and through that control, the mind also comes under one’s control. So it is not that yoga leads to meditation, since meditation is yoga, and yoga is meditation. The marketplace sells us yoga and meditation as two separate practices, perhaps because they have bought into the mind and body are two distinct entities.”

When we practice a yoga asana (posture) we are learning not just to move our body into a particular position but we are learning to focus and meditate on our body and breathing in this position at the same thereby maintaining a sense of union with body, mind and breath.

Among the various translations of the word “yoga” the principle meaning is union. We are learning to be in union with our self and the world beyond through the practice of meditative awareness, whatever our body might be doing in terms of the physical posture.

From the moment we start practising yoga we are meditating (as best we can) whatever the body is doing.

In Patanjali’s yoga sutras there eight parts – with asanas (postures) and pranayamas (breathing exercises) which are described as the external practices of yoga – numbered three and four. Then there is what is called the internal practices: pratyahara (withdrawal of the senses), dharana (concentration), dhyana (meditation) and samadhi (union or absorption, when the practitioner is fully conscious and alert). These last four parts are not separate or sequential but meant to be (eventually) simultaneous. In other words, meditation is part of yoga, not separate.

I said, eventually, because it is worth remembering that it takes practice to improve and perfect something so we might not expect to be meditating all the time, with our mind wandering off distracted at time, as long as we keep returning to the meditation, but the intention needs to be there to be practising properly.

Remember as you practice and move your body into a yoga posture to maintain the concentration, the focus on breathing and body with a silent mind. Meditate on the posture. Be absorbed in what you are doing and not “going through the motions” or lost in thought away somewhere else.

Feel free to share this blog with others, and any thoughts, questions or comments contact me via the blog reply panel below or email me gary@yogabristol.co.uk