How many yogas are there – Part 2 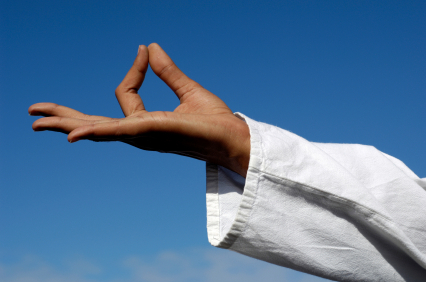 In last week’s article, ‘How many yogas are there’ I mentioned at the end some yogas which had not been covered in the article which focussed on explaining Hatha Yoga and Pantanjali’s sutras – this week I will explain some more.

At the end of the last article I mentioned yogas called Raja, Karma, Jnana, and Bhakti.

Raja yoga is translated from Sanskrit as royal yoga and is mentioned in Patanjali’s yoga sutras as the ‘royal road’ (raja marga) whereby the practitioner “achieves union with the supreme universal spirit by becoming ruler of one’s own mind by defeating its enemies” (Iyengar, Light on Yoga).
The words defeating might sound a bit too much like an Old Testament battlefield but what this is pointing towards is the way we control our mind and steer it aware from the distractions and negativities such as anger, greed, and envy. The raja yogi is defined as a person who has complete mastery over his mind and self – very hard to attain I admit but this is why we call it a practice.

In practical terms, raja yoga is seen as the practice which involves study, practice and discipline, using exercises to achieve the goal such as asanas and pranayamas (part of hatha yoga and patanjali’s yoga sutras); and this is why hatha yoga is often referred to being a part of raja yoga, though some people regard hatha yoga as a separate yoga.

Karma yoga is called the yoga of action or selfless service. Karma means action. For every action there is a reaction. Although “karma” is used a lot in everyday language eg “this is bad for my karma” and so on, karma is not a result, it is an action, that leads to consequences. For every action there is a reaction, so if we do something bad we must know that eventually there will be an action that might well look like punishment for the bad act, so equally a good act will eventually lead to a positive outcome. We are generally aware of this, but do we live every moment in this way, living with self-awareness?

Someone who works in a job helping others, perhaps selflessly, like a charity worker or a relief worker in a war zone could be said to be practising karma yoga. Another example, in Tibetan monasteries the monk who keeps the monastery clean is practising karma yoga as part of his practice, while another monk might be teaching the other monks the sutras and texts as part of his raja yoga practice.

Jnana yoga is called wisdom yoga; with the word jnana described as knowledge (such as, the nature of our existence and other such philosophical and religious questions) derived from meditation. It is also described as direct perception without props and rituals (basically anything which is external).

The Buddha, who concentrated on meditation as the path to enlightenment, could be described as a jnana yogi, as also Ramana Maharshi is called a jnana.

Ramana taught in Tiruvannamalai ,Tamil Nadu, south India, up until his death in 1950. I was fortunate enough to stay in his ashram a few times and meditated in his cave on Arunachala (the ashram sits at the base of this hill). His teachings were based on self-inquiry, on question and answers with the teacher – Ramana – who would not necessarily answer the question directly but ask you to look again inside, and above all, silence. He was known as the silent yogi, and it is through silence and direct enquiry the jnanas believe the yoga is perfected. It is part of the teachings known as Advaita Vedanta, and teachings of non-duality.

Lastly, from the list, is bhakti yoga which is the path of devotion towards a deity, god or gods, the practitioner finds his/her truth. The best known example of this is the Hare Krishna movement which some of you will have seen singing in our streets like Oxford Street in London. The bhakta fills his or her practice with chanting and singing the praise of Krishna and all the gods associated with Krishna and all the other Hindu gods. This is called kirtan or bhajans.

These yogas, especially bhakti, can be found within spiritual practices such as Christianity which is also another way of saying that practising yoga does not necessarily go against one’s faith, in fact it can support it.

This has been a brief overview – you can find books written on each yoga and will find that like many things from India, there are a lot of variations and views.

Importantly, all of the above yogas are not separate from the other, one does not do one and exclude the others, because an individual might have a path which is predominantly on the raja yoga path by practising hatha yoga, but there are elements of the other, from deep meditation along the jnana path, and doing selfless service for others perhaps as a community volunteer and helping elderly family members as part of their bhakti practice. We might not see ourselves as devotional but with a small “s” we will have moments when we have a deeply spiritual experience including an epiphany while in a beautiful spot in our countryside or while practising yoga we feel a deep sense of connection, of elation and bliss, by simply being still with our self.

Any thoughts, questions or comments do contact me via the reply panel or email me gary@yogabristol.co.uk